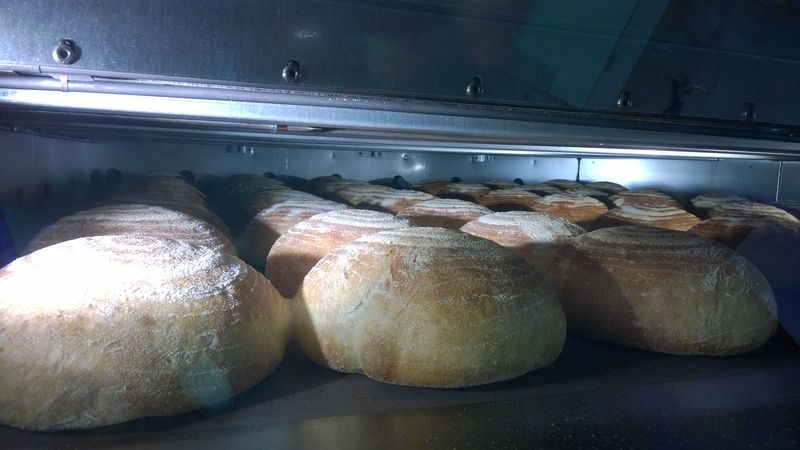 When we first started baking bread we were a pie company making Organic pies for a market that didn't want them. We got the timing perfectly wrong. We entered the Organic market just as it was tanking and everyone was using the recession as an excuse to go back to eating factory farmed meat (pies included).

Having spent everything we owned on a bakery designed to make and bake pies, we were worried about our future. With no money left to change direction and buy new equipment we were faced with the question of what else we could make with the equipment we did have. Basically the only other things we could make were bread or sweet pastries and we went with bread.

Unfortunately the second hand pie oven we had wasn't the easiest type to bake bread with. But through a process of trial and error, fine tuning and lots of little compensations we managed to get initially good results, and eventually lovely results with something we had no right to. But deep down we promised ourselves that if we ever made a go of bread we would treat ourselves to a dedicated bread oven, and we would even try to buy a new one.

Six years later, our new oven is installed, finally working and on Friday we baked our first batch of bread with it. Once the dough had been mixed, bulk fermented, shaped, and completed its final rise it was time to use it for the first time. Having never bought anything as expensive before and after such a long wait I must confess to being nervous as we lined up to load the oven with a test batch of Biga. Would it work? Would my guesstimate oven program (time, temperature, steam, damper, top heat, bottom heat, temperature decay curve) be any good?  And most importantly, would it be worth the wait?

The results were fascinating. Normally, if you time the final rise right, loaves will go through a final burst of activity in the early stages of the bake. This is called oven spring, and in our old oven this normally takes about 15 minutes to complete and you get about 50% rise for a Biga. I stood mesmerised, just watching as the first batch baked (while everyone else got on with the cleaning that needed to be done…). Within 5 minutes of hitting the stone soles the loaves had ballooned by about 100% (some were touching each other as you can see). I had never seen anything like it.

Once they'd cooled and we cut them open and tasted them, the excitement turned to slight disappointment. Yes, we had cracked the oven spring and the guess program wasn't far off, but the crust development masked the fermentation flavour we spend so much time and effort cultivating, and the crumb was light and fluffy rather than chewy and satisfying. We had baked a very good loaf of bread (which some people might have preferred), but it wasn't a Tortoise loaf. We want a loaf where the fermented flavour dominates both the flavour of the grain and the flavour of the crust.

So we've switched back to the old trusty pie oven and are going to run some more trials this week until we crack it. Will keep you posted.

View all posts by mikesweetman